The wait is over now, you can download the latest release of Ndless here!

While the biggest change is obviously the support for the CX II models and operating systems, users of later CX calculators (HW revision W and up) can now enjoy a better LCD compatibility mode, with much better application support and performance.

Note that the needed CX (CAS) OS 4.5.3.14 is not directly available from TI’s download pages, only a special “installer” variant which formats the filesystem can be downloaded there. To avoid this needless formatting, you can download just the plain OS from a mirror on tiplanet.org: CX and CX CAS. If you are currently running 4.5.1 or 4.5.2, you need to upgrade to that version of 4.5.3.

The CX II isn’t too different from the later CX I hardware, but there are a few differences which make certain applications misbehave. nespire needs an update to recognize the CX II and nDoom 2+3 needs changes to work around the “Magic VRAM”. Programs which use the on_key_pressed function (khicas, nTxt) need to be rebuilt with the latest version of the SDK, otherwise they think the On/Home key is perpetually pressed. Those changes are fortunately easy and so updated versions of those programs should be available soon.

Due to changes in the Flash storage layout, support for writing to the NAND directly is intentionally left out, to avoid that incompatible software can brick the calculator by corrupting critical data. Flash and ROM dumping software also needs to be updated to work properly.

Some changes in the workflow helped to discover some bugs in Ndless itself which caused some lua extensions like khicas to crash, which are finally fixed now.
Most of those fixes apply to all supported OS versions, so it’s recommended to update ndless_resources.tns even if you’re still on OS 4.4 or older.

Time to look back on a great piece of TI calculator programming (hi)story:

TI-Nspire hacking began quite early, just shortly after the calculator was released back in 2007 (yes, that’s a decade old!). Originally, discussions and news about it happened on forums like United-TI and yAronet, where famous community members such as Olivier ‘ExtendeD’ Armand, Geoffrey ‘Geogeo’ Anneheim and others shared their discoveries.

Some time later, Hackspire, a community wiki, also got created to bring together such findings in an organized way.

Unsurprisingly, messing a bit with the hardware was required at first, but soon enough hacks became software-based, making Nspire “jailbreaking” much more feasible for the average user. This was made much more easily possible thanks to the amazing Goplat who was able, back in late 2009, to create nspire_emu, the first TI-Nspire emulator (with full-fledged ARM emulation) without even owning a TI-Nspire device. This allowed to dive into the OS and thus to find flaws in order to be able to finally launch our own native programs…

On Dec. 29th, 2009, enough progress was made, such that arbitrary assembly code was run, making headlines on community websites and also elsewhere.

In early 2010, the first software-based exploit was released publicly, under the now well-known name “Ndless” (not ‘needless’, as some TIers would surely like to think). It didn’t take long for programmers to release things like emulators ;)

Now in 2017, with more than 200k downloads from all over the world, Ndless is still alive, working on the latest OS updates, and even though ExtendeD and geogeo aren’t present anymore, the adventure continues as other people like Vogtinator joined the Ndless team to go on unleashing the raw power of the TI-Nspire series, OS update after OS update!

Here’s an overview of the Ndless versions over time since its initial release. The historical source code of ndless and tools is now on Github.

Note that some versions got backported to older OSes, thus explaining the non-linearity in the release dates!

Not mentioned in the changelog column, but of course, each release also brings the usual “improvements and bugfixes”.

The Ndless version matches the OS it targets.

There are still many users of touchpad and clickpad calcs out there, stuck on OS 3.9.0.
This is unfortunate for users of Touchpad CAS calcs, as there is no working Ndless for it.

Additionally, even on Clickpad (CAS/non-CAS) and Touchpad non-CAS, a USB cable and host device were required for the installation, which is rather inconvenient.

Now a separate ndless_installer_3.9.0_classic_new.tns based on the ideas for Ndless 4.4 is now available for all users of 3.9.0 on classic calcs!

The installer is part of the latest ndless download!

We received many requests regarding Ndless for OS 4.3.

However, updating Ndless to support a newer OS release is a lot of time-consuming work, this time it took a bit longer than expected. Long enough that OS 4.4 was getting close enough to just skip 4.3 entirely.

This version was originally meant to be released in a few days, but early tests turned out to be so successful (suspiciously successful) that we decided to just flip the switch earlier.

We usually don’t give any ETA regarding Ndless updates. This will unfortunately also be true for the latest OS 4.3, which is incompatible with the current Ndless revision.

Ndless will be updated as long as there will be contributors willing to spend their time for the community (see this previous post to understand how difficult it can be).

You can subscribe to the blog or to issue #48 of the GitHub project to follow the update.

I must first apologize for the endless flow of unanswered requests for updates.

The long awaited Ndless 4.0 is out thanks to the hard work of the team, compatible with OS 4.0.3. It will let you run native programs on the latest TI-Nspires. The installation (and reinstallation on crash/reboot) does not require to be connected to a computer for a smoother experience.

Get Ndless 4.0.
Follow the installation guide.
Load your TI-Nspire with native programs (maybe crafti or MicroPython?)

As you may know Ndless tightly integrates with the TI-Nspire OS, and each installer is developed for a specific OS version.

The latest Ndless 3.6/3.9 is not compatible with OS 4.0. Do not upgrade to OS 4.0 at the moment as you won’t able to downgrade and use Ndless! If you want to know more about the OS dowgrade protection and the cat and mouse game between Ndless and TI, read this post.

You should know that updating the Ndless installer is hard work. Please subscribe to new posts to be notified once its ready. No ETA can be given, sorry for the  annoyance if you were wrongly adviced to update by Student Software (and blame TI for it).

The Ndless Team devotes itself to open your TI-Nspire to the greatest community programs, OS update after OS update since 2009. We have once again reopened the door for OS versions 3.9.0 and 3.9.1. TI-Nspires sold with pre-built OS 3.9.1 (HW-S) can now enjoy the sweet taste.

If you already have Ndless 3.6 for OS 3.6 installed, stick to it as OS 3.9 doesn’t offer much interesting, and Ndless 3.9 re-installation after reboot is computer-dependent.

You should actually forget OS 3.9 which doesn’t bring anything interesting for users expect the usual anti-Ndless/anti-downgrade protection.

Get the new DowngradeFix 3.9 to uninstall OS 3.9 and (re)install OS 3.6, compatible with Ndless 3.6, the TI-Nspire calculator jailbreak. Make sure to follow all the steps described in the tutorial.

Many thanks to the usual enthusiasts who worked  hard on it behind the scenes.

You will now be able to try out the Ndless-powered MicroPython port and its PyWrite editor. Python is an interesting alternative to Lua and the #1 programming language for learning programming. 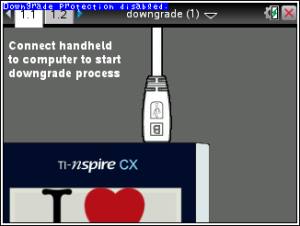