These are some TI-Nspire tools I [ExtendeD] have contributed to, mainly innovative proof-of-concepts, development utilities and low-level hacking.

(if you are looking for other community programs, you may also browse TI-Planet archives, ticalc.org or Pacspire).

Ndless combines since its proof-of-concept late 2009 [hackaday] [slashdot] a resident program and a GCC-based toolchain to open the TI-Nspire to third-party C and assembly (ARM) development, such as Mrakoplaz’s port of Doom [endagdet]. Some call it the TI-Nspire jailbreaker.
geogeo contributed to critical parts of the initial releases but unfortunately had to leave the team mid-2010. Ndless is today updated by a group of enthusiasts from TI-Planet.org and Ominimaga.org.

Luna is a Lua program to TNS document converter that can be used as an alternative to the official SDK. It defeats the compression and encryption layers required since OS v3.0.2. Cross-platform and command-line based, Luna streamlines your Lua build chain. It can also generate any TNS document from its XML source.

HIDn is a set of Ndless-based USB mouse and keyboard drivers with native integration with the TI-Nspire OS.

OCD is an on-calc debugger  that mirrors most of nspire_emu debugger’s commands. Add it to your toolbox for low-level hacking. 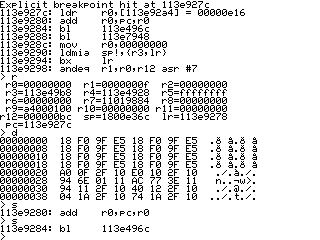 Ncubate is a fork of the well-known Goplat’s TI-Nspire emulator nspire_emu, which adds essential debugging features, and support for the GNU Debugger GDB.

9sweeper was one of the first third-party Lua programs after Goplat’s discovery of a way to run them.

Nleash defeats the downgrade protection of the TI-Nspire OS v2.1.